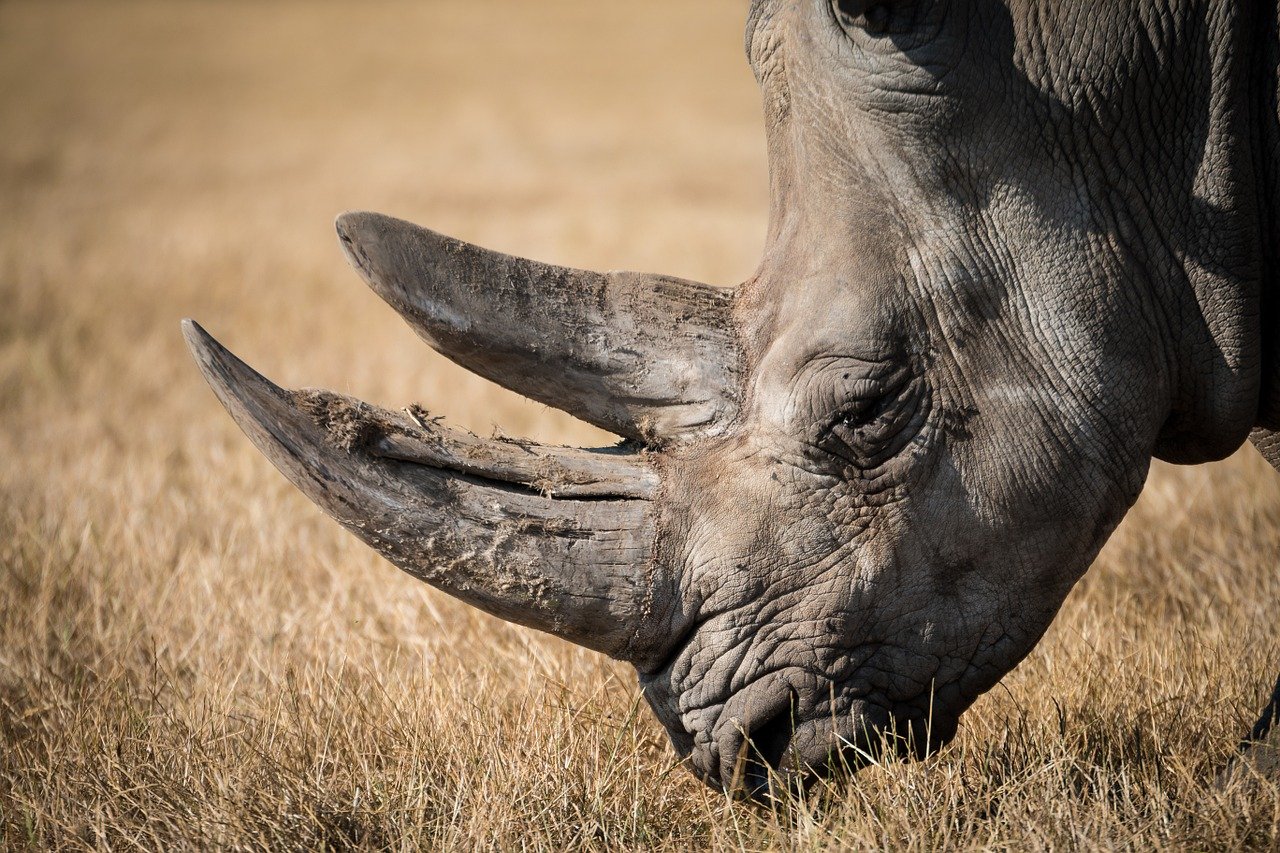 He is the co-founder, 1987, and president since 1989, of the organisation. He graduated from Sheffield University in 1967, taught geography for a while and embarked on a hitch hiking world tour in late 1971. This included three memorable months in Rhodesia.

Having arrived in Perth at the end of 1973, he immediately started a direct sales business, based on his experiences in South Africa. Having enjoyed great success he sold out in 2001 and entered retirement from paid toil, to concentrate on the full responsibilities that fall on the shoulders of the world’s second oldest save the rhino charity and the world’s longest serving rhino fundraiser.

Nicholas has so far made 106 visits to Zimbabwe, formerly Rhodesia, often accompanied by groups of eager supporters, who clearly enjoy experiencing rhino conservation at the coalface. With these visits, and almost daily communication, he likes to keep his finger on the pulse so that his generous philanthropic donations can be adequately monitored.

Nia Carras was introduced to Nicholas Duncan in the mid 1990’s and became his personal travel agent assisting with all the SARF groups to Africa.  Having worked in the Travel Industry for many years and Managing the WA office of one of the biggest travel wholesalers to Africa, Nia was fortunate to have travelled to Africa on numerous occasions, but not on a SARF trip.

She was born in Perth and has travelled the world extensively during her career in the Travel Industry.  She still holds the position of General Manager of a very successful travel agency in Perth.

In 2006 Nia was invited to join the SARF committee and travelled on her first Committee trip to Zimbabwe in 2007 and has since travelled on most SARF trips.   Nia held the position of Treasurer until 2015 and is now Vice President.

Heather Atwell became aware of the work of Save African Rhino Foundation in 2014.  Coming from family with a focus on conservation and the environment, and having a lifelong passion for animals, Heather was immediately keen to become actively involved with SARF and currently holds the role of Treasurer.

Electing not to pursue education in favour of being directly connected with animals immediately following her secondary school years, Heather spent the earlier part of her working life in domestic animal husbandry and care roles, followed by further studies leading to roles in Administration management, currently within TAFE.

Heather considers herself fortunate to have been able to participate in the majority of Committee trips since 2014.  Visiting a number of SARF’s projects has given Heather the opportunity to learn more about their work, gain a better understanding of the local challenges faced trying to protect rhino and wildlife habitat, and to see first-hand the difference SARF’s support delivers to those at the coalface of rhino protection.  She looks forward to continuing those visits and increasing her knowledge once travel restrictions are relaxed and it is once again permitted to do so.

After completing a bachelor degree in property and finance at Curtin University Evan Litis worked in the property industry for a number of years before heading off to travel around the world. After making his first stop in Southern Africa he instantly fell in love with Africa and its wildlife and at his first opportunity returned to complete a course in field guiding. Evan was lucky enough to complete his course and obtain employment at a research station in South Africa, monitoring all animals but specifically concentrating on the Spotted Hyena project.

In 2012 he returned to Perth and commenced a zoology and conservation biology degree at UWA. It was around this time that he became involved with Save African Rhino Foundation, enjoying being able to ‘keep one foot back in Africa’ going on many trips with SARF.  Evan joined the Committee in 2015, which he has been a part of ever since including performing the role of Secretary.

Steve Harrison became involved with Nicholas and SARF in 1994, after reading an article in the West Australian about the foundation.  Having a young family Steve knew that he wanted them to have the opportunity to see the animals of the world that he had taken for granted.

Having a farming background and owning and operating a mechanical business, Steve was able to offer expertise to assist the foundation in the maintenance of their vehicles used in National Parks and Conservancies. He was quickly put to work sourcing parts for the vehicles and other machinery that the foundation had donated around Zimbabwe.

Over the 25 plus years of Steve’s involvement he has helped the purchase of vehicles direct from Japan, as well as accompanying Nicholas to Singapore to purchase former Army Landrovers, some still in use to this day.

During Steve’s time with the foundation he has enjoyed many trips to Zimbabwe giving him an excellent insight into the world of wildlife conservation and the impact humans have had on various endangered species, fuelling his desire to remain a committee member of SARF.

Evelyn Wong became a member of SARF in 2004, when she went on her first safari to Zimbabwe with the Foundation.  She joined the Committee that same year, and has been an active Committee member ever since, taking on the roles of Secretary, Treasurer, and Special Projects Coordinator, successively.  She is a graduate from the University of Western Australia, a Certified Public Accountant from CPA Australia, and she holds a Graduate Diploma in Applied Finance and Investment from the Financial Services Institute of Australasia.  She has worked professionally as an auditor and financial accountant across a range of industries and organisations.

Evelyn, who was born in North West Borneo and has also lived in the remote north of Canada, is passionate about conservation of wildlife and the environment, and her engagement with SARF allows her to contribute to a cause close to her heart, working with people who share her values and commitment, to protect endangered wildlife, particularly the emblematic black rhinos.  Her 2004 SARF trip to Zimbabwe was her first travel to Africa, and she has returned many times since, frequently as a SARF Committee member.

As a veterinarian, Cameron has always had a keen interest in the animal world. Raised on a farm Cameron went on to graduate with a veterinary degree from Murdoch University in 1994. After a period in mixed practice he spent four years working in the UK before returning to small animal practice in Perth, Western Australia. Here, in partnership, he has established a group of clinics while still maintaining an active veterinary role.

It was during Cameron’s years of study that he established his connection with Africa and in particular Zimbabwe. Back packing trips opened his eyes to the wonder of the African bush, particularly the rhino. Hearing an interview on the radio promoting a function with former English cricketer, David Gower, he rekindled his interest in rhino. He subsequently joined the SARF committee in 2013 and sees SARF as the best way he can contribute to the plight of the rhino from his home in Australia. In addition, he is mindful that the conservation of an iconic species such as the rhino has many flow on benefits to habitat protection and wildlife conservation.

Julie Bain was a founding member of SARF having been present at the original talk which inspired a small group, including President Nicholas Duncan, to begin the foundation. Julie has been actively involved in SARF on and off for the ensuing years.

Julie has a Bachelor of Arts and a Graduate Diploma in Library and Information Science. She has held various administrative positions in government, several professional regulatory authorities, and she has also run her own small business. Before being able to retire at relatively early age Julie spent the last 10 years working within the legal Profession.

Julie has a keen interest in Wildlife conservation and preserving the natural environment. She is also currently an active member of The Friends of Jirdarup Bushland which look after an important remnant Banksia Woodland in the Town of Victoria Park, home particularly to many Red Tail Black Cockatoos.

Now retired Julie joined the committee in 2021 and looks forward to continuing her long association with SARF.

Mark Beamish became loosely involved with SARF sometime in the early 2000’s after he was approached by Nicholas Duncan.  Mark was running a battery company and Nicholas needed batteries for equipment SARF was donating to rhino conservation projects in Zimbabwe.

Mark had spent his childhood in Rhodesia/Zimbabwe where his father, an avionics technician, British air force and Rhodesian army veteran, and pilot, would often fly the family to remote bush camps to enjoy the wildlife.  This involved many memorable encounters with rhino.

After the family emigrated to Australia Mark maintained a love for Zimbabwe and has returned many times.  In recent years as a committee member for SARF.   For him the enjoyment of being home in the African bush is always tinged with sadness at the deteriorating situation for the people, wildlife and habitats of Zimbabwe and Africa.