The Savé Valley Conservancy (SVC) is one of the largest private wilderness areas in Africa, measuring 120km N-S and 32 E-W. It consists of sixteen farms, most of which are still occupied by the original owners. Having transformed from cattle country to wildlife in the early 1990s, hunting has been the main business of the conservancy. With recent restrictions to this livelihood we decided to become involved in a big way in 2011.

We are donating field kit, wages, vehicles and training to this project. Existing wildlife has been disturbed by increasing amounts of land re-distribution settlement. Save Valley Conservancy boasts a large population of both black and white and is one of the last great strongholds of rhino in Zimbabwe. 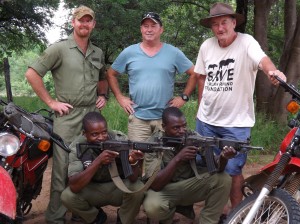 This is now our biggest single project with an amazing $2,500,000 donated in the past ten years. Our major funding partners in this vital initiative are OAK Foundation, African Wildlife Foundation and TUSK Trust.

There is also a very important Wild Dog project in SVC – see www.africanwildlifeconservationfund.org

We have been donating kit as well as four vehicles for the past five years and have recently made this project a top priority.

This poaching gang has now been eliminated!!!!