This area consists of sixteen adjoining farms, most of which are no longer occupied by the original owners. SAVE African Rhino Foundation became involved in their early rhino 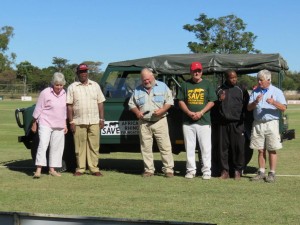 days and marvelled as the numbers increased from 30 to 60+. We helped with various aspects of rhino management in all our usual ways, as well as the de-horning programme currently being planned for the area. Rhino numbers have severely declined in the area since 2003 and are now down to 4!

The main suspect for these illegal killings has been arrested on four separate occasions and managed to persuade the authorities to release him each time!?

There is now an annual Mid West Rhino cricket tournament each May and we contribute with auction items for sale.

We can no longer justify too much expenditure here though we have helped with more than $100,000 in the past 10 years, plus a second hand landrover.