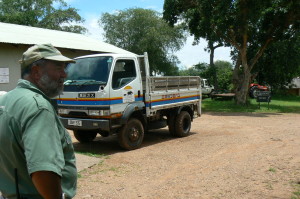 Matusadona is located on the shores of Lake Kariba. In 1988, there were thought to be about 180 rhinos in the area, 60 in 1991 and during the 1993 de-horning programme, only 14 animals could be found. The headquarters of the IPZ are at Tashinga, which also serves as a rhino rehabilitation centre, where the captive-bred calves from Imire Game Ranch are relocated and gradually introduced into the wild. The rhinos were closely watched during their first 3 years in the area before their final release.

We have three 4wd vehicles here, all in need of repair and one having been recently written off as a result of a drunk, unlicensed driver going off a bridge in it. Not surprisingly, no disciplinary action has been taken against the driver! 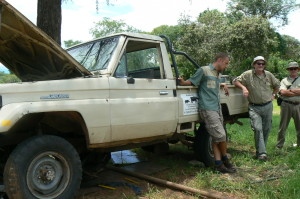 In line with poaching activity around the rest of the country, the rhino numbers are dwindling, now thought to be as low as 1!

A relatively new initiative, Matusadona Anti Poaching Project (MAPP), is endeavouring to assist with law enforcement in the area and has made remarkable progress since their introduction.

Our involvement here has been extensive over the years, and $123,000 has been spent in the last seven years in our attempts to assist National Parks.