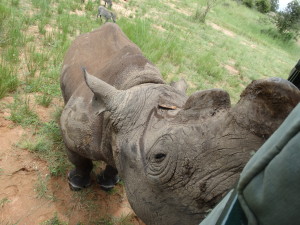 Back in 1987 seven orphan rhinos, four females and three males,  were rescued in the Mana Pools area and taken to Imire Game Ranch to be hand reared, the first such project in Zimbabwe. We’ve been funding them in different ways since 1991.  In the mid nineties the first calves were born and a total of 14 have resulted. The dominant male and female were relocated to Matusadona, as were the first eight surviving calves. A cow was killed by an elephant in 2004 and the dominant male went to Botswana in 2006. The remaining three rhinos were killed by poachers in their overnight pens in 2007. 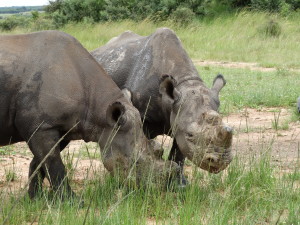 This left four calves who have grown up together and two white rhinos have been translocated from Matobo. All are doing well and there are probably some pregnancies there. In the last seven years we have assisted with $28,000 including contributions to their local education fund, dehorning and scout uniforms.

There is now a third generation black rhino calf at Imire.