Sinamatella is in the northwest corner of Zimbabwe’s main national park, Hwange. Over the past 20 years since its inception as an Intensive Protection Zone, it has been our biggest and best National Parks project. Rhinos reached nearly 100 in the early 2000s, but sadly, since 2003, there’s been a continual battle against poaching. The rhino death toll in the area from poaching has been severe, with now only a possible 6 animals left!

In 2003, a major management program to insert radio-transmitter in the rhino horns was co-funded by SAVE African Rhino Foundation and Dambari Wildlife Trust. This programme has been ongoing since and we are offering considerable field assistance to the area, under the management of Stephen and Sue Long. 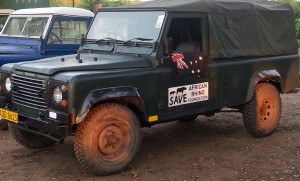 We have funded considerable specialised training for the rangers and provide ongoing logistical and internet support to the park. Further information is available at www.bhejanetrust.org.

In May of 2014 Sinamatella was a proud receiver of an old army Singapore land rover defender to retire the other vehicle. This ‘new’ vehicle will help with logistical support including ranger deployments and communications

One of ‘new’ Ex-Army defenders from Singapore in Sinamatella