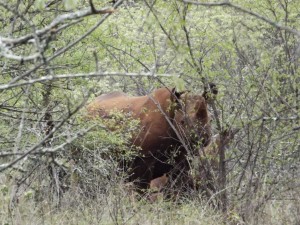 In the south of the country can be found Bubye Valley Conservancy, which is a large wildlife area used for hunting (not rhinos). Their rhino programme began in 2003 when rhinos were moved there from vulnerable areas and it has continued to grow as a rhino stronghold, contributing more than 100 black rhino calfs in this short space of time.

In recent times this trend has been halted and now there is a new owner of the conservancy and Bubye is self sufficient.